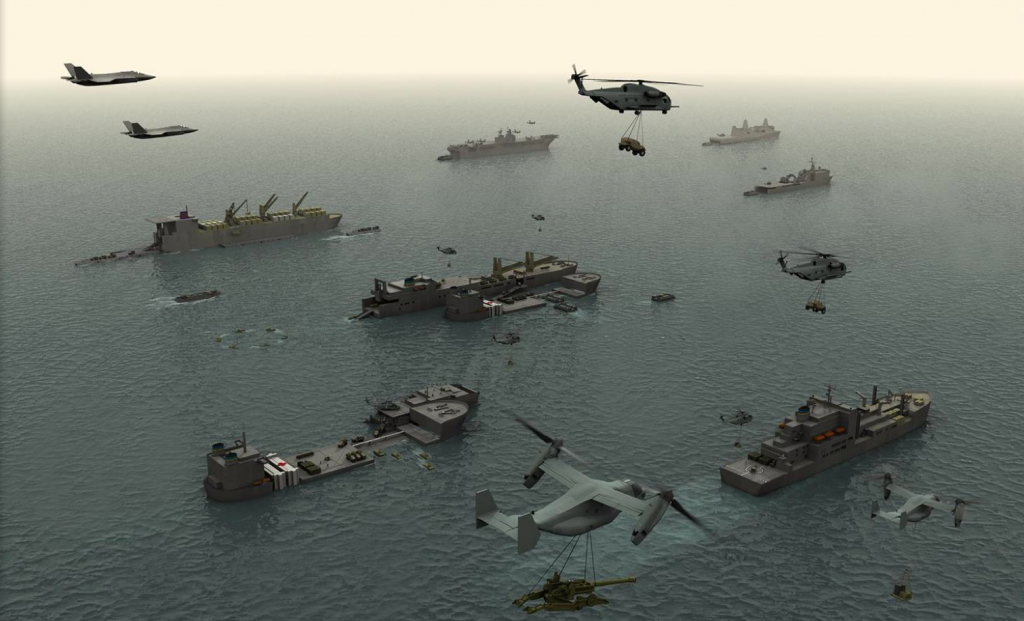 Tridentis was just awarded a Phase I SBIR (Small Business Innovative Research) Contract with ONR (Office of Naval Research).  The topic that was awarded to Tridentis is the development of “Technology for Ship to Shore Connector Concepts with a Combined High Speed and Payload Fraction”  (Navy SBIR 2015.1 – Topic N151-075).  Over the next year, Tridentis will work on developing a concept design for a surface connector for ONR that is capable of carrying troops and equipment from the Sea Base to shore.  Our landing craft will be capable of carrying 210 LT of cargo while traveling 20 knots at a distance of up to 200 nm from the beach.  This craft will have beaching capabilities while being able to interface with the Sea Base and the well decks of US Navy Ships.

Bringing troops and equipment from ship to shore is a hugely challenging and important challenge for the Navy & Marine Corps, and our nation’s military, industrial, technological, and design talent have not been able to solve it, despite over 50 years of effort. As our expeditionary operating concepts have changed from short ship to shore movement, to operations from over the horizon into littoral waters defended by precision guided munitions, our methods and capabilities to move fighters and material ashore have remained unchanged. The ability of our naval forces to operate most effectively in the 21st century and implement the various operational concepts such as LOTS (Logistics Over The Shore), OMFTS (Operational Maneuver from the Sea) and modern Sea Basing are critically dependent on a vehicle (connector) that can quickly and reliably move people and material from ship to shore from over the horizon in most weather conditions.

Tridentis’s task is essentially to design a landing craft (or “connector” vehicle) that is small enough to be transported in an amphibious ship well deck, or deck loaded and offloaded on a Navy, Army Preposition Ship, or Military Sealift Command vessel. Then the “connector” must be able to be launched at sea, carry significant cargo, smoothly on and off load it, (potentially under fire) and have good speed and range. This design challenge has never been satisfactorily solved.   Over the next year, Tridentis will develop the concept design that will meet this challenge.