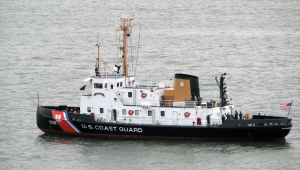 The Tridentis Team provided a range of engineering services and program management support for the Service Life Extension Program for the 140’ WTGB Icebreaking Tugboats. This is a fleet of nine boats with various configurations. Tridentis performed systems design and engineering analysis in support of the USCG Surface Forces Logistics Center (SFLC), including marine/mechanical engineering, electronic engineering, naval architecture, and engineering specialty disciplines.

Steering Machinery - Tridentis designed a replacement for the existing steering machinery.  The team investigated the various system configurations for faults using the casualty repair data to perform a root-cause analysis, proposed replacement of outdated equipment that was unsupportable, interacted with multiple vendors performing a market analysis of current replacement equipment and designs, and completed a design study outlining the recommendations including a cost estimate, weight and moment impacts, a 3D digital model showing equipment size and clearances, and developed a procurement specification. Additionally, the final report included all integration requirements of the system with existing structure, electric equipment, and piping interfaces.

Pumps and Motors - As part of the SLEP, all the pumps and motors onboard need to be supportable, thus Tridentis took inventory and stock of all pumps onboard the ship. This list was then cross-referenced against the casualty repair list to determine which were able to be recapitalized and which needed to be renewed. The salient characteristics of the pumps for renewal were then researched against the USCG stock system and a commercial market survey to procure acceptable replacements.

Top Stack Design - Tridentis proposed modifications to the top stack design that were intended to limit the amount of rain water that was collected by the stack drain.  A trade-off analysis was done to determine the effectiveness of the modifications. After proposed designs were considered further cost reduction was required, thus our team proposed another option of running the drain to a new oily water tank for storage, with an overflow discharge valve. This preliminary design report included drawings of the new pipe and valve, and comments on regulatory body requirements.

Structural Inspection and Design - The Tridentis team supported an overall evaluation of the ship’s structural soundness. Tridentis performed a preliminary inspection of the ship looking for rusting, wear, and other damage. A report was developed that detailed the findings.

Tridentis investigated the impacts of performing a structural strengthening of the bow stiffeners. Team engineers reported the impacts on the forward space’s electrical system, firefighting system, and overall storage capacity, as well as the weight and moment impacts of the additional structure.

Naval Architecture - Tridentis tracked the weight and moment stability impacts for the total SLEP equipment removals and replacements. This was a critical function due to the fact that most ships late in their life cycle will have used up much of the initial margins built into the design. The centers of gravity and displacement were plotted on the allowable KG curve to show the improved stability resulting from the changes.

Procurement Support - Tridentis developed and reviewed the procurement specification package that was released for open competition for a number of different work items. This involved creating the specification requirements, performing a small business market survey, developing an independent government cost estimate (IGCE) and Acquisition Plan, and a Source Selection Plan.

Tridentis was involved in the technical review of proposals for solicitations of a number of systems including boat davit, icebreaking bubbler, watermist firefighting, steering system, mechanical shaft brake, fuel filtration system, HVAC Chiller system, gyrocompass, Oily Water Separator (OWS) system, and AFFF system. The proposals were evaluated against the specification criteria and assigned merit and risk rankings. If clarification from a vendor was required, a report was written summarizing the issue.

Tridentis engineers reviewed the structural, electrical and general arrangement detail design drawings for a number of spaces and systems. This included both rip-out and installation drawings, bill of materials, one-line diagrams, and fluid diagrams to be used by the shipyard performing the upgrades.

Ship Checks - Tridentis conducted multiple ship checks of the USCGC Morro Bay in New London, Connecticut.  The ship checks included inspecting the existing steering gear system equipment, habitability spaces, top stack, paint locker and general structure throughout the vessel, speaking with the crew about problems with existing systems and likely causes for various CASREPs. The follow-up ship check was to verify the details of the designs that had been developed.

After inspection of the vessel, Tridentis analyzed the existing set of drawings, engineering reports and prior design reports in order to capture the full scope of the tasking and to ensure the correct technical requirements were being used. This work was documented with pictures and videos, and pertinent data was summarized in a ship check report for each work item.

Tridentis reviewed the vendor provided technical documentation and design details in addition to the shipyard created production drawings in support of the equipment installation during the SLEP availability. The team verified that the work planned fit within the scope of the SLEP work items and fully integrated all the government furnished equipment (GFE) and commercially-furnished (CFE) as engineered in the system design study.